We are expanding our Open Shuttle portfolio with the Open Shuttle Fork, an autonomous guided vehicle (AGV) forklift for pallet transport. Find out more about our new product in conversation with the product manager and the head of software development.

Gregor Schubert-Lebernegg has been project manager for the Open Shuttles since 2012. What’s your take on how automated guided vehicles (AGV) and autonomous mobile robots (AMR) are developing? What’s the latest from KNAPP on that subject?

Gregor Schubert-Lebernegg: In the past few years, we’ve seen a great deal of development in the field of AMRs. The market developed very well and expanded. At KNAPP, we’ve responded to our customers’ needs as well: we’re now offering a large portfolio of autonomous vehicles covering many different applications. With our latest, the Open Shuttle Fork, we now have an AGV for pallet transport. This Open Shuttle in particular features a combination of different characteristics that is unique in the market.

The Open Shuttle Fork turns on a dime and is great for compact layouts with narrower aisles. Best thing is, you can get it at a very competitive price. 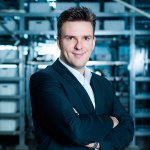 What does the AGV forklift by KNAPP feature? What’s so special about it?

How can the Open Shuttle Fork be used and what applications can it cover?

Gregor Schubert-Lebernegg: A couple of examples include the internal transport of pallets, supplying work stations, such as decanting work stations, transport jobs in goods-in, applications in a block storage warehouse and transport jobs in goods-out. Other uses are, for example, in mobile order processing. There are still many warehouses where people pick manually from pallets. Even here, the Open Shuttle Fork can complement these processes and provide a lot of added value for our customers. The functionalities of the shuttles include the transfer of pallets to and from pallet conveyor systems.

Navigation and control of the AGV forklift

How does the Open Shuttle Fork navigate?

The Open Shuttle Fork navigation is based on SLAM technology (Simultaneous Localization and Mapping). The natural contours are detected, saved and continuously compared with the known contours of the route. The forklift therefore always knows where it is. Thanks to this approach, the Open Shuttle Fork can be started up immediately, without changing or adapting the existing infrastructure.

Thomas Ulz: Localization works without additional markers, simply based on the existing contours. No inductive loops in the floor or any other type of visual marker are needed. The laser scanner of the AMR simply reads the existing contours. Based on the localization, the Open Shuttle Fork navigates through its surroundings. The vehicle uses virtual lines, or tracks, defined and managed in our software.

The automated guided vehicle forklift for pallets is managed by the KiSoft FCS software. This ensures, most importantly, smooth-flowing fleet traffic and the optimum assignment of transport jobs.” 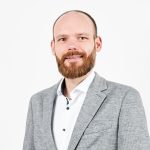 Mr. Ulz, you head up the department for software development at KNAPP Industry Solutions. Tell us more about the software for the Open Shuttles.

Thomas Ulz: The Open Shuttle Fork is managed by the software KiSoft FCS. KiSoft Fleet Control System (FCS) is the central instance for coordinating the fleet of autonomous mobile robots. KiSoft ensures that the fleet traffic flows smoothly and optimally assigns the transport orders. This is accomplished by planning and reserving the travel paths precisely and by correctly communicating the driving commands to the AMRs, which then carry out these commands. The travel paths exist only in the software and are therefore virtual. You can compare the functionality of KiSoft FCS to a flight control system, where very precise directions ensure the smooth and efficient flow of traffic.

How are the orders assigned?

Thomas Ulz: KiSoft FCS can be combined with KNAPP systems as well as other host systems or can be implemented as a stand-alone. The assignment of orders considers all available AMRs and all the defined travel paths as well as the current traffic situation and coming work load. An optimized workflow and throughput for the entire system is the result.

What can be controlled using KiSoft FCS?

Thomas Ulz: Naturally, the fleet control system works best with KNAPP’s AMRs. This includes the Open Shuttles for container transport, the Open Shuttle Fork, our AGV for pallets, as well as the Open Shuttle Store. Interfaces such as the VDA 5050 allow the software to control the AMRs of other manufacturers. Manual transport resources such as forklift trucks can also be mapped in the system. One definite advantage of KiSoft FCS is its scalability. This applies not only to the fleet size in terms of its ability to control a variety of vehicles using its line-based system, but also through the scalability obtained by just adding more vehicles.

Availability of the AGV for pallet transport

That was quite a bit of information on the Open Shuttle Fork. What are the options for actually getting the autonomous mobile robots for your warehouse?

Gregor Schubert-Lebernegg: We take two approaches to this. On the one hand, the Open Shuttles can be purchased “ex works”. We offer the right training courses for this. After successfully completing the training, the customer then has the ability to start the AMR himself, to put his own use cases into the software and to make changes. For this option, there is a fixed price per shuttle as well as a monthly fee, which covers hotline service and maintenance. On the other hand, at KNAPP our specialty is developing customized all-in-one solutions with the very best software and technologies in the mix. The cost of these projects naturally depends on the respective solution. But if you just want to get started with automation, or to smooth out your peak periods, the Open Shuttles can also be rented or leased.

We are here to help:

Anna-Carina Adam
Communications
Industry Solutions
From production to smart production: Digitization is at the forefront of the new trends and challenges facing production companies. Anna blogs about this topic, especially about the intelligent automation solutions for production. Autonomous mobile robots is another topic she researches and writes about.

How can we make sure that production is sufficiently supplied with all the necessary materials at all times? Learn more about what it takes to make this a reality and what the interconnected logistics system behind it looks like in this blog post.

Industry, Logistics of the future, Technology

Especially in times like these, supply plays a central role. Which trends and market developments are influencing the manufacturing industry? How can we respond to these challenges? The first part of this post on intelligent production supply will focus on these issues.

Industry, Logistics of the future, Trends

What we can learn about logistics from bees: Autonomous mobile robots give processes new flexibility

Just like bees, autonomous mobile robots work in an intelligent swarm. Learn more about our Open Shuttles and their many applications in production and logistics.

Would you like to learn more about our Open Shuttles? At KNAPP, we look forward to discussing ideas and requests with you to create new solutions. Write to us at blog@knapp.com.

Subscribe to our blog
You will receive a notification as soon as a new blog post is published on a topic which you are interested in.
Create a blog alert
Let’s keep in touch. Do you want to learn more about trends in logistics and production? Are you interested in special topics and would like to be informed as soon as a new article is online? Subscribe to your favourite topics.
Job-Alert wurde aktiviert
Ihr Job-Alert wurde erfolgreich angelegt.