Talk from the construction site

Exactly what we wanted

A Swiss Army knife can be found in almost every home. The company that develops and produces them is called Victorinox and they sell high-quality pocket knives, household and professional knives, luggage, watches and perfume worldwide. Optimizing their logistics is now on the agenda in order to make outbound deliveries more efficient. For this purpose, the new “Europa Distribution Center” near company headquarters in Ibach-Schwyz is being built with an automation solution by KNAPP. 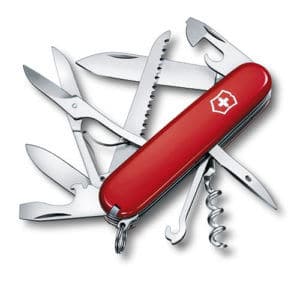 How did you find out about KNAPP?

We started with a greenfield site and invited 10 providers. After numerous presentations and visits to reference sites, we narrowed it down to three, and then finally to one, which was KNAPP.

KNAPP appeared to be very professional, but their approach to the project admittedly surprised us at first. We anticipated a presentation but got a workshop. After the initial shock wore off, we were right in the middle of an in-depth process analysis, the result of which was a complete process map, with which was straightforward to navigate.

What makes the project so special?

Mario Rauch: The Swiss Army knife was always something special to me. As a child, if you had a Swiss Army knife, you got respect. When I first walked into the Victorinox offices, I immediately sensed something special. The Victorinox employees work passionately for this company, which in turn truly focusses on the people who work for it. This is also in line with KNAPP’s philosophy and provided a great basis for our work together from the get-go.

What were Victorinox’s requirements and what were their goals?

Dennis Haverkate: We have several product groups – pocket knives, household and professional knives, luggage, watches and perfumes. These are shipped from various warehouses in different packages. The first goal was being able to ship an order comprising several product groups in a single package. We also lacked transparency when it came to costs. The difficulty lay in keeping the overview of stock in the various warehouses and being able to estimate the correct volumes. Therefore, the second goal was a simple, clear solution in which goods from production are only moved once. Walking in the warehouse should be kept to a minimum and we should always keep the overview.

How did KNAPP get started on the project?

Mario Rauch: We developed the project from the top down. Had we started at the numbers/data/facts level, we would have missed many things that would have a huge influence on the solution. The project letter, which was excellently prepared by Victorinox, described the initial situation as well as the project aims. Furthermore, it also gave us a round-up of the company’s values and vision, which helped us to truly understand the company. With this overall picture in mind, the next step for us was to look at the supply chain. This had to do with how the separate product groups developed historically. Our goal was to understand and harmonize them. We therefore analyzed the individual product groups and began to sketch the solution on paper. What happens in good-in, what kind of structure do we need in storage and what happens in the packing process before the package is shipped to the customer? This is how we developed a logical, functional warehouse before we knew which technologies we would use. We were able to tell the story of the warehouse and then we tested the model for all the product groups and for robustness. Once this model was functioning, the best technological solution for handling all the respective articles was designed.

In the beginning, you were sceptical. How was KNAPP able to gain the trust of Victorinox?

Edgar Flecklin: This was an unusual way for us to proceed. Here came a supplier with post-its – which raised some eyebrows – until we understood what KNAPP wanted. But what really mattered was that during this intense collaboration we built up a foundation of mutual trust. When you look at the company cultures of KNAPP and Victorinox, we are on the same wavelength. An employee at KNAPP is also not just a number, but a person whose work is truly appreciated. We experienced this at first hand when we toured the KNAPP headquarters: friendly people and amenities such as the kindergarten and company cafeteria. Our wishes were taken seriously – KNAPP always involved us in our solution. During visits to references, we also talked to these customers when KNAPP wasn’t there to get a feel for their experiences. KNAPP’s excellence was apparent again and again. Even when they planned a project that was too big for our site, they adjusted things promptly and within 24 hours we had a new solution on the table – a solution we are still confident of today. We saw how KNAPP rose to the task of resolving the error, went to great lengths and provided a solution geared to the future.

What moments were critical and how did you handle them?

Dennis Haverkate: Even though we did not have 100 percent of the necessary experience, we wanted to handle this project ourselves instead of using a planner. We wanted to learn what happens in projects of this type and scale. We wanted to understand the data that we were dealing with. We are very good when it comes to production, but others are better at storing and shipping. All the providers presented their concepts to us by the second deadline, but at this time, KNAPP had not yet provided a concept. Although we now understand why, as a first step, it did not meet our expectations.

Edgar Flecklin: As a Swiss company, we try to consider Swiss partners as much as possible, so non-Swiss companies have to make an extra effort to convince us. The decision to use an Austrian company had to be based on facts. In the end, it was the concept that convinced us – we had exactly what made the best sense for us. The chemistry was also a fit – friendly interactions with a bit of fun but then getting right down to business when needed.

How did KNAPP react to that?

Mario Rauch: From the beginning, we had a good foundation for a professional cooperation. We were also convinced that we had the right solution for Victorinox.

During the difficult times, open communication with each other really made a difference. Critical topics were openly addressed, and we could work on them. This really strengthened our relationship in the end.

Dennis Haverkate: We also only negotiated at the last minute, even though the budget was of course, important. The solution, however, was the focus.

Edgar Flecklin: Money should not be the deciding factor, instead, the solution should be fit for the future.

What do you expect from the solution?

Edgar Flecklin: We expect the system to support us in our day-to-day business and to function for decades to come. We also expect support even after the system has been completely installed. Our visits to references confirmed that KNAPP offers just such support to its customers. We also expect to gain speed with the new system and to be able to significantly reduce the delivery times to our customers. We expect the order cycle time to be reduced from two weeks to one day. One further factor is the 0-error strategy, even though we currently have a manual solution with an error rate of just 1-2 %. Every error is one to many for us. Furthermore, by centralizing, we want to reduce costs and simultaneously secure jobs. That is why we are building in Switzerland and investing in the future of our company.

What is the project status?

Dennis Haverkate: We are in the building phase and are on schedule with the exception of a few minor delays. The construction of the warehouse will be finished in August 2019 so that KNAPP can start. Internally, we still need to work on processes involving barcode compatibility and preparing master data.

What expectations do you have for the cooperation?

Dennis Haverkate: I hope to continue to work together as we have done up to now. We have always been similar and have spoken openly about things such as problems or errors, or when we saw something differently. I find the open and proactive approach extremely positive and I hope it stays this way.

Mario Rauch: In difficult moments, the human factor is very important. Every project is one of a kind. Even if the components are standardized, the combination is always something special. There are always situations that do not progress the way we expected them to two years ago. For me, it makes a huge difference in such situations whether someone is a true partner or not. How you relate to each other, how you treat each other, being open and able to laugh about yourself – are all important. You always know that there is someone you can call when something is not functioning the way it should be. You help each other out.

Edgar Flecklin: The interpersonal, cooperation, creating something together and working on it is very important to us. Everyone has their own perspective, and you have to build bridges now and then. However, you can only build bridges when both sides are doing their part and this is happening now.

What was the deciding factor that led you to choose KNAPP?

Dennis Haverkate: On one side, the hard facts: the solution, the proactive thinking, how the solution is used and what it means for the decades to come. The costs, building the processes, the automation solution that is itself not too large. On the other side, there are the soft factors: the collaboration, the attitudes, the interest and the ambition to land the project – I found them impressive.

The expertise, the methodology and the solution that we now have on the table have established a foundation of trust for the future.

Margit Wögerer
Communications
Healthcare Solutions
Margit handles a variety of topics in our blog to do with healthcare. Her stories and interviews provide an inspiring view into the world of intelligent logistics solutions for healthcare, covering everything from production to distribution to patients.

Invisible. Essential. Underestimated. Software.  Software – it’s invisible, essential and yet all too often completely underestimated. Though we are mostly unaware of it, software accompanies…

John Lewis & Partners and KNAPP get ready for Black Friday

The peak time of retail sales has a rocket start with Black Friday at the end of November every year, opening the Christmas shopping season. Over half of all British consumers will make purchases on Black Friday, and of these, almost 80 % will do so online.

Subscribe to our blog
You will receive a notification as soon as a new blog post is published on a topic which you are interested in.
Create a blog alert
Let’s keep in touch. Do you want to learn more about trends in logistics and production? Are you interested in special topics and would like to be informed as soon as a new article is online? Subscribe to your favourite topics.
Kontaktanfrage wurde weitergeleitet
Vielen Dank für Ihre Kontaktaufnahme. Wir melden uns in Kürze!
Job-Alert wurde aktiviert
Ihr Job-Alert wurde erfolgreich angelegt.
Maintenance
Due to maintenance work, the job portal cannot be used from 11/5/2022 02:00am until 11/6/2022 02.00pm.
Contact us